Travel CTSA to Rotherham- and see Burton Albion at home for free (and other stories)…!

On Saturday 26th November our mighty Reds have a trip to Yorkshire, where confusingly they are scheduled to play Rotherham in Sheffield. You can travel to that game with the Alliance for only £15 (or for an extra tenner combine that with our trip to Crewe in December)- but by travelling with us to Rotherham you will get yourself a free terrace ticket for our home game against Burton Albion on 10th December! So, if you’re a season ticket holder you’ll be able to bring a friend or family member to the Burton Albion game for free, and if you’re not a season ticket holder you’ll effectively be getting your coach travel to Yorkshire for less than nothing, given that a terrace ticket would have cost you more than a coach ticket! We’d like to thank the club for their generosity.

In addition to this, all Alliance travellers who travel to Rotherham or Crewe (or have already travelled to Hereford or Bury) will get one free entry per trip into a prize draw to win a signed away shirt, which will be presented on the pitch at our home game with Barnet on 30th December. To book travel, please contact Travel Ken on 07843124845 or via email travel@ctfcsa.co.uk- or visit the Alliance cabin opposite the club shop on Saturday.

The Crawley Town Supporters Alliance will be relaunching the Golden Gamble this Saturday afternoon when the team take on Oxford United in League 2. Look out for the 3 Golden Gamble Girls, dressed in red jackets, who will be out and about around the Broadfield Stadium selling tickets from 1pm.

Tickets will cost 50p each and the draw will be made at half time when you could win a cash prize or a signed prize from the club.

CTSA spokesman James Laraman says ‘we hope that supporters will enjoy being part of this exciting initiative.’ He added ‘we look forward to rewarding CTFC supporters with great cash prizes, as well as supporting some worthwhile causes.’

After giving out the prizes 50% of the profit will go towards the CTFC Centre of Excellence and 50% to other CTSA “Football in the Community’ initiatives –so in fact all of the investment will go towards supporting your club and your community.

The girls will be helping for a 3 match trial period to gauge fans reactions but hopefully the Golden Gamble, with your support, will become a regular attraction at the Broadfield. So buy a ticket for a chance to win, but also secure in the knowledge that you’re doing your bit to positively influence the future of your football club. 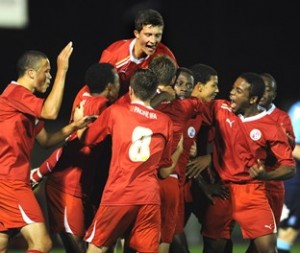 Crawley Town will never be Manchester City. We will never be able to go out and buy the best players in the world at enormous prices. We will never be Arsenal or Chelsea either; able to let other clubs develop good young players before picking them up for a song. If we want to compete and be sustainable in the long term we have to, for want of a better phrase, “grow our own”. That is why the work of the Centre of Excellence is so important.

Since last summer Simon Rusk and his dedicated team have taken on the near impossible job of building an entire academy structure from scratch in what seems like ten minutes flat.  CTFC now has successful teams at every age range from under 9 to under 16’s, plus- of course- a Youth Team already exceeding expectations. Most of the players within the youth set up come from Crawley and the surrounding area, and this is how it should be- the club at the centre of the community and the community at the centre of the club.

The Crawley Town Supporters Alliance was formed to assist the success of our football club and our community and to represent the interests of CTFC supporters. On that basis it seems only right- as agreed at the EGM- that we do all we can to support the Centre of Excellence. On Saturday we will be proud to announce a sponsorship deal which will see the players from Under 9 to Under 16 wearing the CTSA logo on their shirts for the remainder of this season and all of next season. We also relaunch Golden Gamble, with much of the profit also going to the Centre of Excellence, and we are committed to working alongside Simon and his team to help bring success to the club in the future.

We are sure that all CTFC supporters join with us to wish Simon and his academy scholars success for this season and beyond- particularly as if that success is forthcoming, we all reap the benefit.