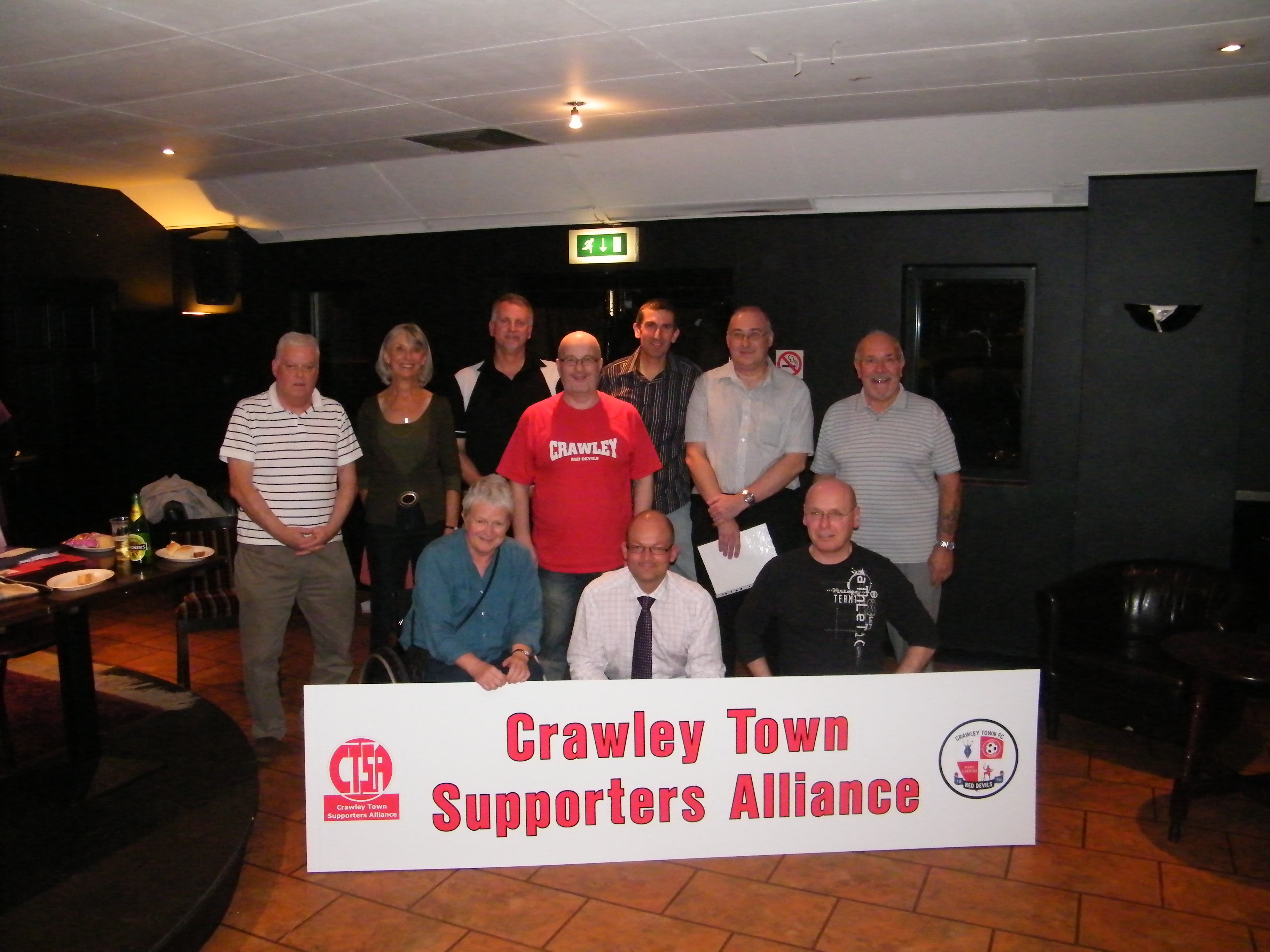 Around 60 Crawley Town Supporters Alliance members turned up in Redz Bar last evening (5th Oct) for a positive and entertaining EGM. Whilst the main feature of the evening was to officially vote in the new board other important matters were discussed.

Interim Chairman, Ian Townsend opened up by welcoming everyone to the meeting. He spoke about the hard work done since the summer and paid tribute to former Co-Chairs Ron Parsons and Steve Leake. He added that he was pleased with progress so far. His main message focused on more fans coming through the Broadfield turnstiles and travelling away. He said ‘ there are 1.3 million people living in Sussex and we need to secure more of them to become Reds fans. We have something very special going on here at CTFC but there is a lot of work still to do -we need to do that together!’

Ken Blackmore (Travel Ken) mirrored this in his speech, he revealed, ‘we have done OK so far but we need to up our game still further; we need to develop a greater away culture amongst Town fans and make sure that the team gets bigger and better support away from home. We feel that the Supporters Alliance can play a big part in this process by offering a great service and it is our long term plan to do so.’

John Hooper (Community Initiatives) revealed to the meeting news about the Soccer in Schools initiative. School children in Crawley are receiving free Football Coaching from professional CTFC coaches funded by the CTSA. It is proving to be a popular idea and it is certainly engaging the with the local community (Watch out for more news on this soon).

Guest speaker -and meeting Chair- Chief Executive Alan Williams said ‘We are very proud to have one supporters organisation. I want to thank the Interim board for the exceptional work they have done so far’. Alan then introduced the 12 members of the Interim Board, who read out their election statements and were duly voted in on block with a 100 % approval.

Simon Rusk (Head of Youth) and Steve Leake (admin) then took the floor to discuss the new ‘ Centre of Excellence’. Simon explained ‘every league club needs a strong youth system and here at Crawley Town we are striving to attract talented youngsters not only from the local area but also further afield. We want to constantly improve our service and support of these young players but we require financial help to do this, anything the CTSA and its membership can do would be very much appreciated.’ Alan Williams added ‘Simon has done an amazing job with this new venture and has worked extremely hard. We should be proud of what he has achieved so far.’

Ian asked those present for a show of hands to confirm whether the membership would, in principle, be happy for CTSA funds to be released to sponsor the Centre of Excellence. Judging by the positive response it looks as though the CTSA and the new ‘Centre of Excellence’ will soon working together. A lively discussion ensued, and Simon answered a number of questions from the floor.

During the final round up of members questions Alan revealed that the exciting new East Stand complete with 2151 covered seats should all be up and running by early February 2012. Ian then closed the meeting, thanking all present and members who couldn’t attend for their support, as well as thanking the Football Club, Silpa Winfield and local MP Henry Smith. The meeting was closed at 9pm, and all moved on to a buffet supplied by Redz Bar. Thanks Rhona!

The minutes should be up here sometime next week, as there’s quite a lot to write up. We shall leave you with a Rogues Gallery! 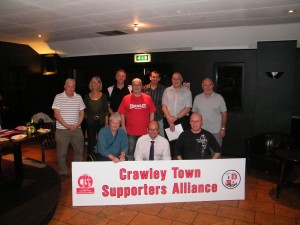