Reds the Kings of Herts!

Home | News
At 5pm yesterday there was collective feeling of relief and celebration between management, players and fans alike as we tasted league victory at Stevenage.  There might have been an element of luck about the winner but after our tough winless streak WHO CARES! It’s three points on the board, and as George Friar said later, “hopefully we have turned a corner”. We all hope George is right!
The day started in less exciting fashion as two coach loads left base at 11am.  Ken looked after a packed number one coach while Paul was in charge of a the second coach. A crash on the M25 had driver Alan ducking and diving around Heathrow Airport which was great for the plane spotters amongst us.  Yours truly got the first two correct but was embarrassed  by a school boy error in naming a Virgin A340 a B747 (unforgivable mistake).  James L was more interested in airport perimeter security fences. (Dear reader, I can honestly announce that this conversation was as riveting as it sounds. We went on to discuss pensions and real ale. Coach Two- the party bus! Ian). 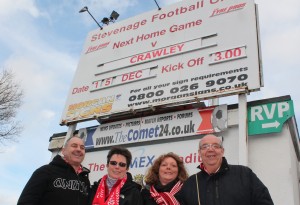 Steve, Debbie, Sue and Clive. Shhh, one of them has a headache!

During the transfer we caught up with Debbie and Steve Giacomelli (West Stand Season ticket holders) and Clive and Sue Brooks (East Stand) who were on the back seat. Sue was feeling a little delicate after her office party the night before so I whispered my questions! Steve Clive and Sue all seemed pretty satisfied with the way our season is shaping up however Debbie had some stronger views. She said, “I think we should be doing a lot better and be higher up the table; we have some brilliant players but I just don’t think that our forwards are scoring enough goals and Richie should be looking to freshen up the attack.”   (Even after our victory yesterday, Sue might have a very valid point).   The guys are really looking forward to the festive schedule (and who wouldn’t be). Steve said, “to be playing a massive club like Sheffield United on level terms is amazing for CTFC, it’s a huge indication of how far we have come.” Family commitments have scuppered any chances of going to Fratton Park but they will all be at Bournemouth. The Reading cup tie is already on the radar. Clive suggested, “with Reading fighting for survival there just might be an upset on the cards, it should be a fascinating afternoon.” We hope he’s right. 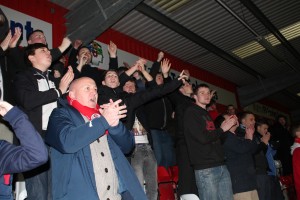 We arrived at the Lamex Stadium by 1.30pm and made the short walk to the away section.  In the stand was a lovely bar that seemed to be packed to the rafters.  There was a real pre Christmas feel to the place with free mince pies and mulled wine at the bar.  It was soon time to take our place in the well appointed Buildbase Stand behind the goal.  To be honest it’s probably the best stand in the whole ground and I was amazed that they offer it to away supporters. We had a fantastic view of the action.  Angela Townsend was feeling quite at home.  She said, “this ground has a very Broadfield feel to it even down to the distinctive red and white colour scheme”. She is right of course, and there are other comparisons to be made too, given we’ve both progressed from non league recently and have similar sized- if too small- fanbases. 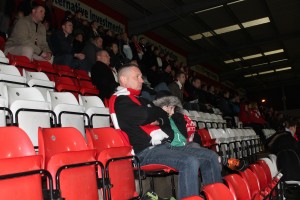 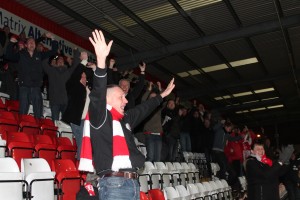 The first half passed by without incident.  During the break heavy rain took control and with the ball zipping around it exploded into a very exciting encounter.  Stevenage came out rampant and to be honest were well worth their lead.  Just as ‘here we go again’ thoughts drifted in we got back into the game when Hope kept his footing and calmly slotted a rebound.  This was no tap in but a very cool finish under pressure.  Four mins later the away pen was in delirium as Danny smashed one in from 25 yards; ok, it came off a Stevenage head but that didn’t matter a jot and judging by the way players dived in the mud in celebration it clearly meant a lot. From the two photos here you can see the difference a goal makes to us fans! We held on manfully, with Jones making a stunning late match winning save.  Cue wild celebration and all the favourite Christmas jingles getting an airing. 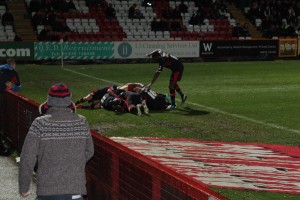 Thank goodness Persil gets out all known stains…..

This was huge win for the club and as George was saying on the way home, “it’s just the sort of tonic we need before we go into an intense festive schedule;  Danny was man of the match for me and deserved his piece of luck today. Its been a fantastic day out and hopefully everyone is now looking forward to the visit of Sheffield next week”.

The day finished, and I am saying this a lot recently, in monsoon conditions travelling back down the A1.  Our Clarke’s drivers have had some pretty rotten weather to contend with this season but as always they provided a safe and comfortable transfer home.  (Please watch out for a Clarke’s article in the CTSA page of the Sheffield United Programme). 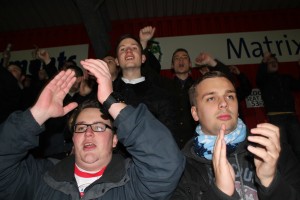 Job done and another League One away win under our belts.  Well done all- now get yourselves booked up for Portsmouth and Bournemouth!
Words and Pictures from Colin Bowman, CTSA Matchday and Event Press.

The Usain Bolt appreciation society on day release in Stevenage