CTSA Player of the Year Awards Night 2012/13- the end of a magnificent season! 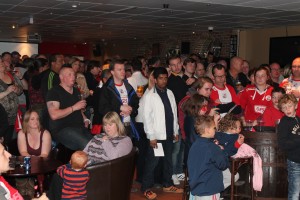 Player of the Year Awards Night- standing room only!

Fans packed into Redz bar last evening for the first CTSA Player of the Year Awards. During a truly wonderful evening they shared laughter and beer with the first team squad and management team, and applauded our wonderful players as they took their prizes. 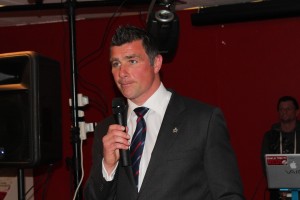 Manager Richie Barker addressed the audience at the start, “we have said before that League one  is predominantly northern based, so many thanks to all the away fans  for following us up and down the country, your time and effort is  very much appreciated.  Next I would like to thank the my staff  who I work with every day, I am a very demanding person.  Lastly I would  like to thank the players, they have been very receptive and haven’t been any  trouble on the training field, the group is probably the best I have ever worked  with and deserve all their success. Have a great summer and look forward to seeing you all next season.”

Vice chairman Matt Putland then introduced the awards with chairman Paul  presenting. All the results are at the bottom of this article. 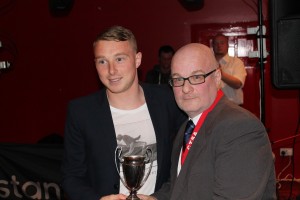 Player of the Year Nicky Adams looks a bit shellshocked after a strange bloke in a suit rings a bell in his ear….

After several count backs and by the narrowest of margins Nicky Adams took  the grand prize of CTSA Player of the year. His 15 second goal at home to Reading was perhaps the highlight of a stunning first season with us. 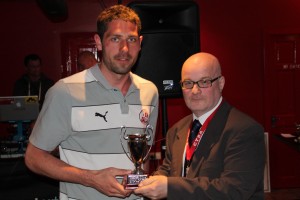 Away Travellers Player of the Year Paul Jones, and a short bloke!

The ever popular goalkeeper Paul Jones picked up the Away Player of the year.  As Matt said, his save at MK Dons was like something from “The Matrix!” 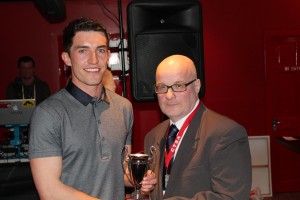 Joe Walsh won the Young Player of the year, romping to success with 49% of the vote.

The house went mad when Dannie B was revealed as the CTSA living legend  award winner. A worthy win which went down very well with the fans.
With loads of younger supporters in house CTFC staff made it a  memorable evening indeed. Everyone was in a celebratory mood and players  were very happy to sign shirts, programmes, photos , anything, and  happily chat away.  A brilliant end to a fantastic League One bow  ! 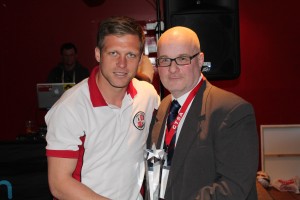 One of these men is a Living Legend. See if you can guess which!

The CTSA Player of the Year Awards returned the following results:

The CTSA Player of the Year is Nicky Adams. Paul Jones was the runner up, and only 2 votes separated them. The results were as follows:

Away Travellers Player of Year 2012/13– awarded to the player who the travelling fans felt was consistently the best performer away from home:

Matt Sadler and Josh Simpson- both 8%

The “Crawley Town Living Legend” Award was presented to the one and only Dannie Bulman!

On behalf of the Crawley Town Supporters Alliance, thanks to all the players, the management team and the backroom staff for another wonderful season. 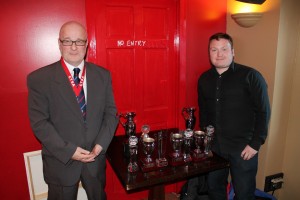 Before the awards- we can’t show the “after” pictures in case you’re of a nervous disposition! 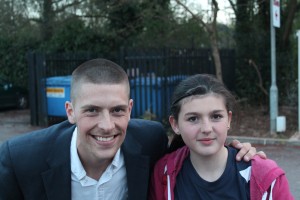