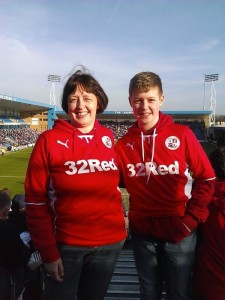 On the 8th March, the CTSA travelled  to Kent Reds’ took on Gillingham at the Priestfield Stadium. 388 intrepid Reds’ followers made the short journey to Gillingham as the Reds’ lost 1-0, including regular CTSA travellers Marilyn Loughton and her son Olly, so we caught up with Marilyn for this weeks’ fan focus.

Marilyn, since your time supporting Crawley Town, how often have you travelled away?
“I travel away as often as possible- me and Olly. We are trying to do as many as we can this season.”
Of the away games this season, what has been your favourite day out?
“Leyton Orient – the whole day was excellent. We played really well and the atmosphere was fantastic!”
And how about ever?
“Accrington Stanley was a memorable day for obvious reasons!”
Who has been your player of the season so far, and why?
“Controversially, Mike Jones. He may not be a constant in the starting eleven, but he is a very unique player who we currently seeing the best of in my opinion.”
Since John Gregory has arrived at the club, what have you noticed to be the biggest change in comparison to the previous managers regime?
“There has been a much more positive attitude in the squad recently, and we haven’t buckled under pressure. The lads have finished games much better, continuing to fight rather than being content with a draw, for example. Gregory also acknowledges his mistakes which has gone down well with fans!”
At Walsall, I asked Ollie Plunkett if he thought the Tuesday – Saturday games until the remainder of the season would have a positive effect on the squad. From the first few, how do you think we have done?
“We’ve done very well. We have no major injury worries and a big squad which always helps when you a fixture backlog.”
Onto today’s game. What made you come to the game?
“It’s a close game and easy for me to bring Olly to, and the CTSA travel was very cheap, as was the match ticket so it is a very affordable day out.”
What do you expect from the game?
“We should hopefully win, with the good form of late continuing?”
Lets have a score prediction, Marilyn!
“3-1 Crawley with Proctor to score. He deserved a goal after his performance against Stevenage!”
Words and pictures from the one and only Craig Bratt!