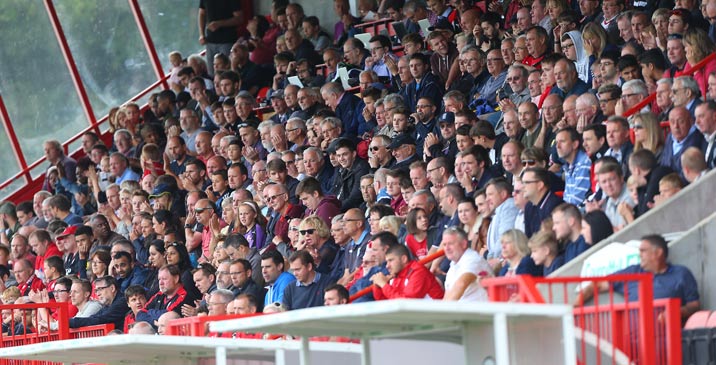 Please see below, the minutes from CTSA meeting held on 10th March 2020.

Darren Ford gave the background to the community defibrillator proposed for the People’s Pension stadium. Following a meeting with SECAM, a defibrillator has been made available to cover for people in the vicinity of the Stadium and both 3G areas specifically on non-match days. Currently, the closest defibrillators are situated at Southgate Medical centre or K2, both on the other side of the A23.

Darren stated that the Foundation are seeking funding for the installation of the defibrillator outside Redz Bar and that it was anticipated that this could amount to £600-£700. Not only would the installation of the defibrillator potentially save lives, but it would also give the Foundation the opportunity to train 400-500 people in defib and resus techniques.

Darren was thanked for his input and advised that the committee would discuss the level of support we could give once he had left the meeting. Darren did agree to offer assistance with regards to the provision of balls, bibs, cones and goals (if needed) for the Football Festival on April 24th and also agreed to offer media support with regards to both the Easter egg appeal and the Festival of Football.

Darren then left the meeting and after minimal discussion it was agreed that the CTSA would support the installation of the defibrillator for half of its cost up to a maximum of £500. Steve Leake to inform Darren at Extra time hub on Friday 13th March 2020.

Crowd funding for flags within stadium

A donation of £100 was approved to this crowd funding project on the proviso that the flags were seen not to be inappropriate. Samples were shown which were acceptable in their content.

A discussion on membership took place. It was agreed the current arrangements involving Season Ticket Holders and Reds Rollover members lacked clarity and that the following would be implemented for Season 2020/21.

The current free membership for Season Ticket Holders will be ended. Free membership was offered to increase interest in previous seasons, particularly around the election of the Supporter Representative. However STHs with free membership do not contribute to the finances of the CTSA, are not shareholders and as such do not have a vote as set out in the constitution.

Finally, in response to comments on social media, the CTSA board confirmed that whilst Season Ticket Holders had in the current season been given free membership, it had not been the intention to confer any voting rights with the free membership. The constitution makes clear that only members paying a membership fee are shareholders in the CTSA and have the right to vote; additionally it had not been the intention that supporters not contributing to the finances of the CTSA would have a vote in how the CTSA was run or how its finances were utilised.

We currently have 39 members but this should rise to at least 41 by the next draw. This means we are on target to reach the £1,000 already pledged towards the installation of the new scoreboard. The aim is to get membership up to 50 by the end of the season. Sam has contacted the club about making the payment of £1,000 but hasn’t heard back yet.

Four of the six charities receiving eggs this year will be collecting on match day on April 10th with the other two picking up on Thursday 9th April and a date to be agreed. Paul Hayward has made a very generous donation towards this cause and we are currently at 140 eggs. Steve Leake and Andy Tester to be available on Thursday April 9th to handover eggs to one charity.

Rules were handed out for review.

Steve Leake to give team briefing and also organise raffle with help from family.

Andy Gregory has asked if he can also enter a team but it was agreed to point out to him the philosophy behind the festival in that it is intended to be for Reds fans only and not registered league team players. Steve Leake to message him to this effect and also to point out to him that being a referee may be considered a conflict of interest.

Andy Tester asked if people could seek prizes for the raffle from any contacts they had and it was noted that Paul Hayward had very kindly donated the cost of a table (for 8) in the Executive area for a game next season as first prize. The football club have also agreed to support with donations.